Our developer client approached us having bought The Blue Hayes, a one-time restaurant, in its current guise vacant, in a rural setting, with separate staff accommodation on site.

The main building, single storey thatched, had become dilapidated, considered a bit of an eyesore from the road. The site had the potential for residential development, but our client had been told obtaining planning permission would be tricky since the council had already rejected a prior application to convert the buildings into holiday lets. 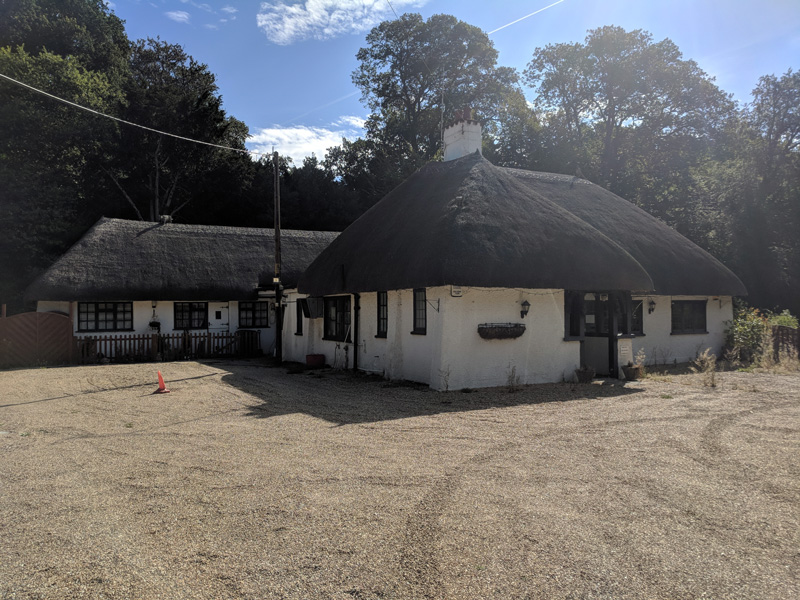 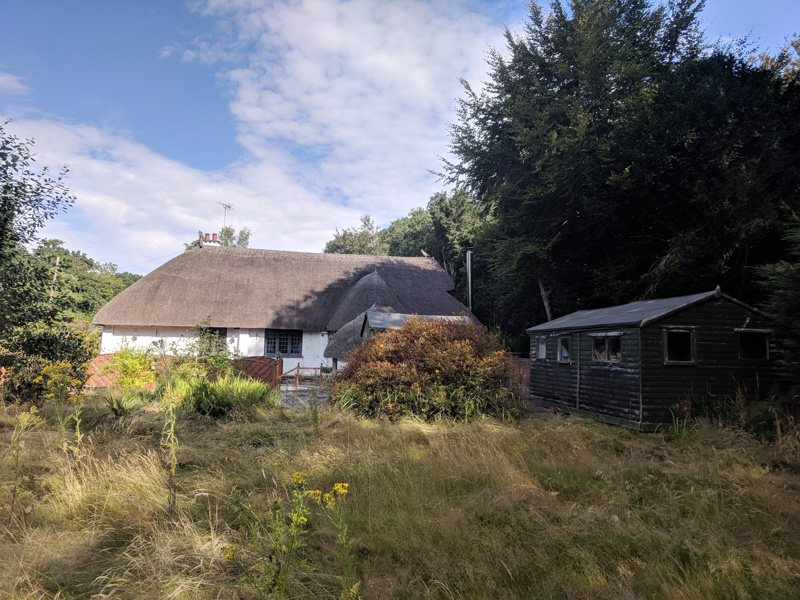 “Can we get planning permission for more than one residential dwelling on the site?”

Our view was that we could probably get two detached residential dwellings on the site, to remain in keeping with the character of the setting, but knew from previous experience that an application for two new builds would be rejected.

By getting consent in principle for two dwellings in the existing building, we could tackle an additional building separately and focus on a better design for that building later.

We focused on a series of planning applications which moved us towards permission rather than expecting permission straight off the bat.

Collaborative Site Visit
When meeting the client and the architect on site, we noted that Blue Hayes was in a large unkempt plot, and because it had been left vacant for over a year, the site had become overgrown and unsightly from the road.

To achieve the end goal, we approached the project in stages.

1. Our first planning application went in proposing we sub-divide the main house into two residential dwellings, each with their own garden and access. The application was supported by national and local planning policy, as the property would be considered of greater value to the area than in its current guise.

2. Once we had planning consent in principle for two dwellings in the existing, thatched build, we proposed splitting the site into two plots and submitted a planning application for minor amends to Plot 1 – the old restaurant – and a detached, contemporary new build on Plot 2.

OB Architecture came up with a stunning contemporary design for Plot 2. A two-storey dwelling with its own access from the road in a beautifully landscaped scheme. In contrast to the single-storey thatched house already on site.

Both would be visible from the road, but with separate driveways, the houses would look in keeping with others along the road, which were already a variety of styles, sizes and periods.

With no style precedent along the road, we felt that a development of houses in a uniform style would be more likely to be rejected.

It was crucial we proposed the right design, which was architecturally appealing and worked within the site’s constraints, fitting the character of the area. While simultaneously proposing plans that meant distancing the plots, improving privacy and enhancing the area.

A few objections came in during the second application, one for landscaping, the other from the council’s tree consultant, concerned that the new build would have an adverse impact on the root systems of mature trees outside the site boundary.

It’s worth knowing... Regardless of whether trees have a TPO (Tree Preservation Order), if they’re mature, in good health and of good quality, you need to establish an extremely valid reason for doing anything to compromise their standing.

We employed tree consultants and embarked on a rigorous consulting process, preparing a full tree survey, visiting the site and marking out the proposed new build, so the planners could see it in relation to the trees. We suggested moving the site another metre westwards and satisfied the council planners that construction could go ahead without impacting the trees.

Planning permission for two separate dwellings was approved at committee.

Our client knew we would take a staggered approach from the outset, so they understood and were happy with the outcome. So much so, we’re thrilled to say they’ve been a regular client ever since.

There have been a few minor variation applications to both Blue Hayes plots since the development work was done and the houses sold on. We have secured planning permission for a garage extension to Plot 1 and a slightly larger floor plan for Plot 2, with a few minor internal reconfigurations plus a swimming pool in the back garden.

All uncontroversial and all approved at planning. 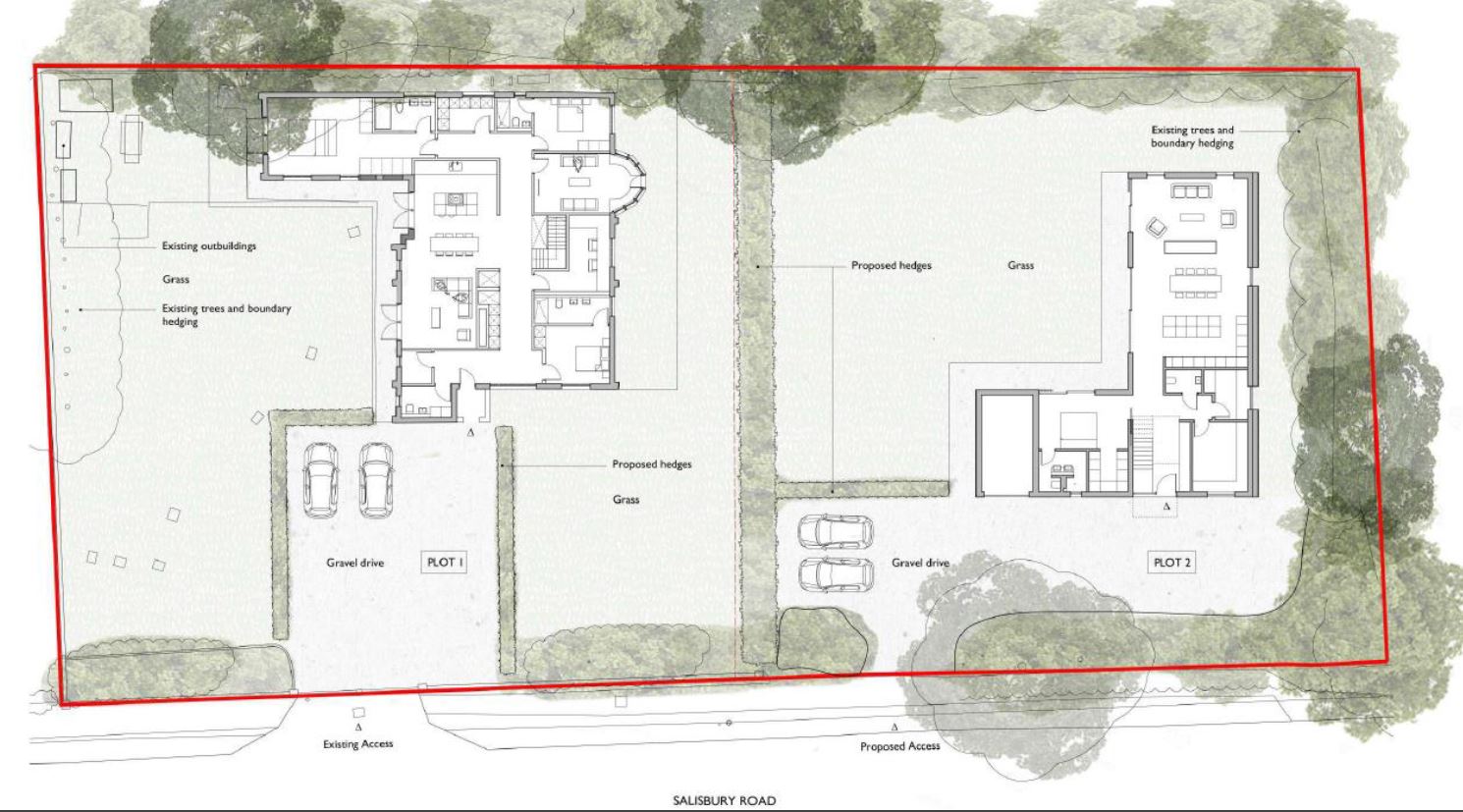 “If we know the site from a previous application, it’s always great to work on that site again.”
Ben Kelly.